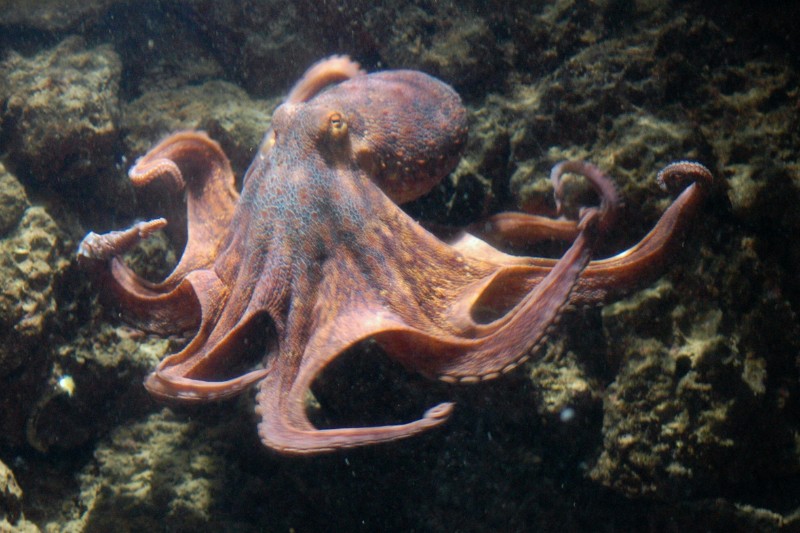 Although you might not think it to look at them, octopuses have a similar number of neurons as dogs. 500 million neurons make up an average octopus. The majority of them—about two thirds—are in its arms.

The remainder of the neurons are found in the octopus’s head, inside the doughnut-shaped brain that is surrounded by the oesophagus.

Octopuses have been shown to be intelligent in various ways- in mazes, they figure out how to get the food reward and return back to their home. They’re also very good at escaping (or getting into) small areas.

In the animal kingdom, tool use is rather scarce, and we usually equate it with apes, monkeys, dolphins, and parrots. Only a few invertebrates like insects and octopuses have been shown to possess the ability to use tools, which is a solid predictor of learning potential in invertebrates. They scavenge for anything they can use and pile like rocks and broken shells.

Octopuses can not only recognize other members of their species, but also human faces. So if you enter an aquarium with a particular octopus more than once, it will recognize you! They can even remember the faces of people they don’t like.

How Many Brains Does An Octopus Have?

Octopuses have nine brains that allow them to centrally and locally control their actions. Did you know that each of an octopus’s eight arms contains its own ‘mini brain’? By configuring their arms in this manner, they are able to manipulate each of their arms faster and more effectively.

With 9 brains, 500 million neurons and the ability to problem-solve, use tools, recognize faces, and remember things they don’t like, octopuses are smart creatures. They are curious animals with complex behaviors and emotions, which makes them a fascinating species to learn about and observe.