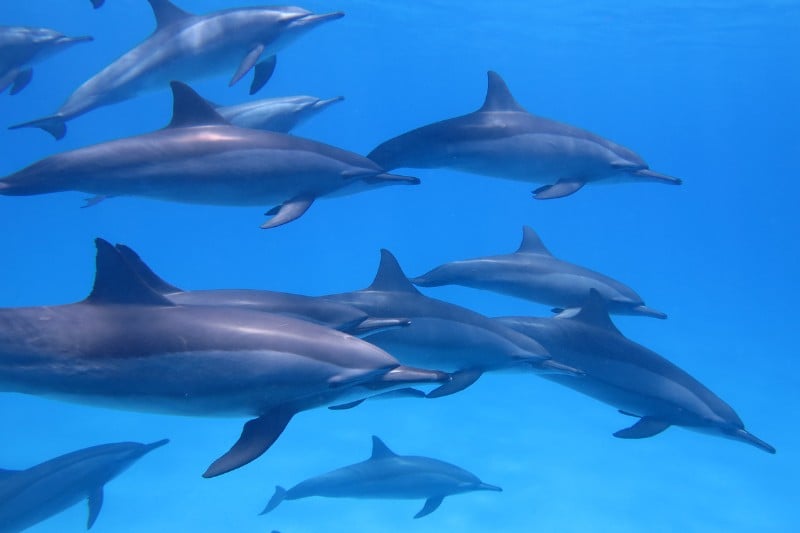 Bottlenose dolphins stay together in pods and help protect each other from sharks by chasing and ramming into the attacker to scare it off. Recently, there has been an aerial video of orcas, the largest type of dolphin, chasing off a shark with the intention of killing it.

There has been a long-told myth that sharks are scared of dolphins and that it’s safe to swim where the dolphins are because then, no sharks will be around. While they can detect and avoid danger, the presence of dolphins doesn’t guarantee a shark-free zone. Sharks and dolphins eat the same food, so they sometimes share the same waters.

What Dolphins Can Kill Sharks?

After orcas were captured on camera killing great white sharks, scientists have published new findings confirming that the marine mammal hunts these predators. Orcas, who sit at the top of the ocean’s food chain, have been known to hunt other types of sharks before. But there hasn’t been much evidence that they go after great whites specifically.

Sharks vacated the scene soon after the attack transpired, with only a lone great white being seen in the next stretch of 45 days. This is based on data that was published in Ecology, a scientific journal.

Orcas, often called ‘killer whales’, are the largest members of the dolphin family. Though they’re technically dolphins, their large size led to them also being called whales. Many people refer to them as dolphins. Both terms are valid, and it all depends on how precise a person is in the classification.

The recent evidence that orcas hunt and kill sharks is a reminder of the power and intelligence of dolphins. Though bottleneck and common dolphins are rarely seen as fierce predators, orcas display a much more aggressive attitude with their powerful hunting skills. It’s important to remember that though dolphins are mostly harmless and friendly creatures, they can be powerful hunters when needed.