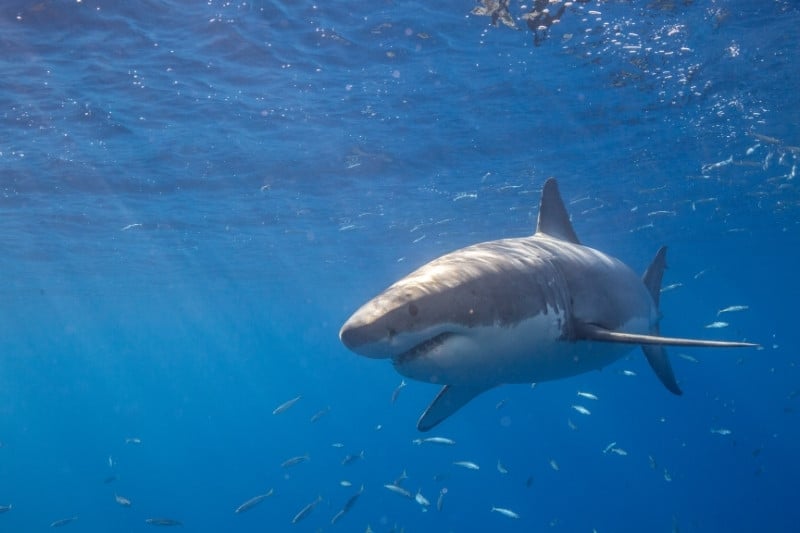 Believe it or not, sharks do not have bones! Instead, they are made up of a cartilaginous skeleton which is much more flexible than the rigid bones that most animals, including humans, have.

Sharks belong to the unique group of animals known as elasmobranchs which also includes rays and skates. The cartilaginous skeletons in these marine creatures are made up of tough, flexible tissues that give them great mobility.

What Serves as Skeleton for Sharks?

The cartilage that forms their “skeleton” is the same type of flexible connective tissue that gives shape to your nose and ears. Even though sharks lack bones, they can still become fossilized. As most sharks get older, they begin to store calcium salts in their skeletal cartilage which acts to fortify it.

Dried shark jaws have a similar feel and weight to that of bone. The abundance of these minerals in shark skeletons is what allows them to fossilize so well. Since teeth have enamel, they often show up in fossil records.

The Advantages of Having a Cartilaginous Skeleton

You might think that having a skeleton made of cartilage would be disadvantageous but in fact, it has several advantages. Here are some of the benefits of having a cartilaginous skeleton:

A cartilaginous skeleton allows for greater mobility, making it easier for sharks to move quickly and efficiently through the water. Flexibility also helps them to maneuver around obstacles and capture prey. Cartilaginous skeletons give sharks an advantage in the ocean by allowing for increased maneuverability and agility.

Having an internal skeleton made mostly of cartilage allows for a lighter weight. Cartilage is both tough and flexible, while only being half as dense as a bone. Since sharks have a low density, their body mass is significantly smaller. This means that they require less energy to swim through the water.

As you can see, sharks’ cartilaginous skeletons offer several advantages that help them survive in their aquatic environment. While they don’t have a bone skeleton like other fish, their cartilage still provides them with remarkable protection and flexibility.

Sharks do not have a traditional skeletal system, but instead rely on cartilage for structural support and protection. Cartilage also allows them to remain highly flexible and lightweight in their aquatic environment, giving them an advantage when hunting prey and avoiding obstacles. They sure don’t need bones to survive in the ocean!